The Owls will be aiming to make it back-to-back wins this evening as Darren Moore’s men lock horns with Morecambe at Hillsborough. 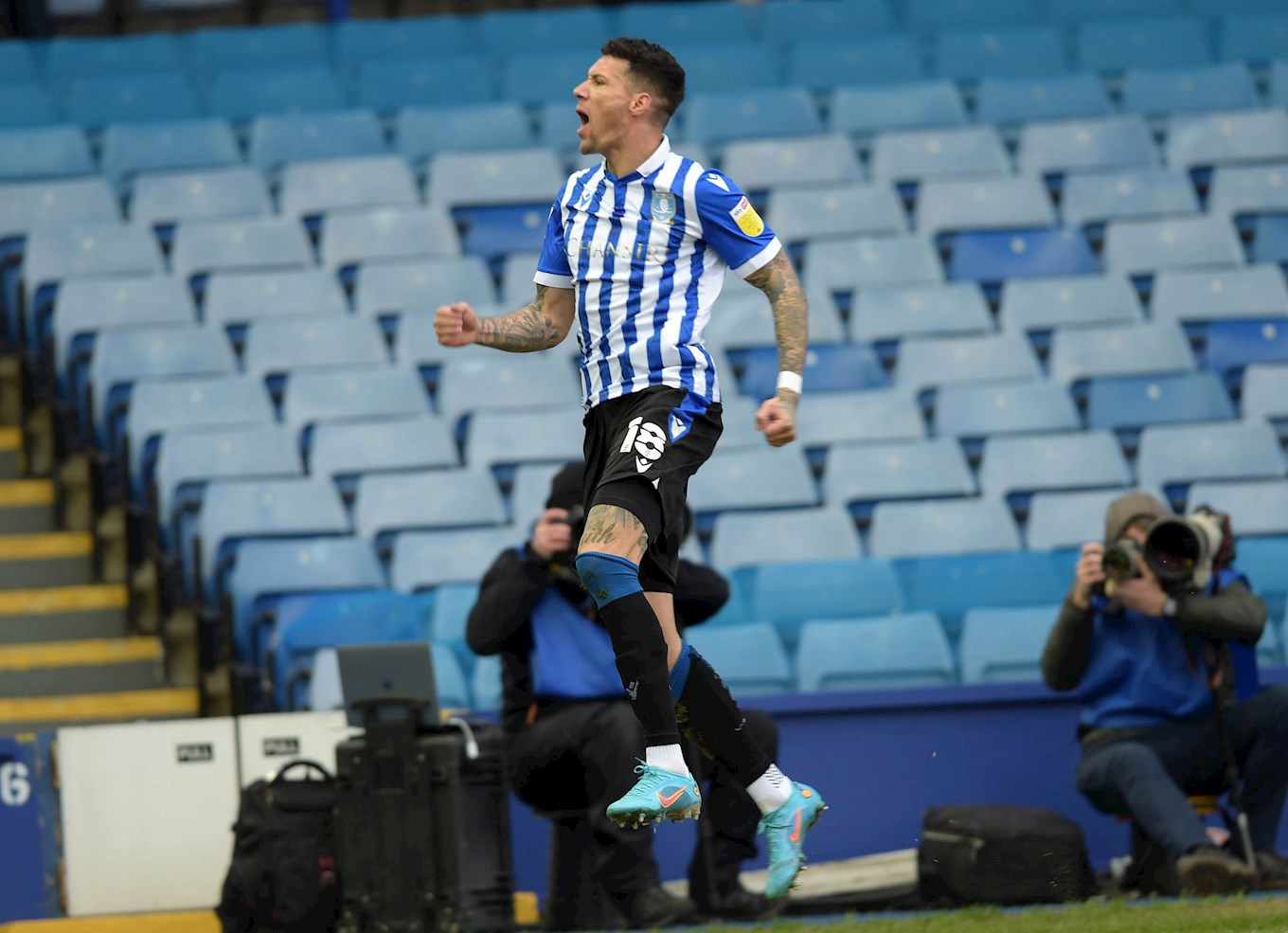 Wednesday have tasted defeat just once in S6 all season, the most impressive such run in the whole of the EFL.

Heading into the game, the Owls are six points off the play-off spots with a game in hand over sixth-placed Oxford, while tonight’s visitors Morecambe are one point from safety in 21st position.

The Shrimps, though, will carry a threat tonight with one of the league’s leading scorers among the ranks.

Striker Cole Stockton has netted 17 times from 26 appearances this season.

Wednesday: Lee Gregory (toe) was absent from the squad on Saturday.

Moore says the striker will be assessed this week and is therefore unlikely to play on Tuesday.

Dennis Adeniran has been ruled out for the season after undergoing an operation last week. 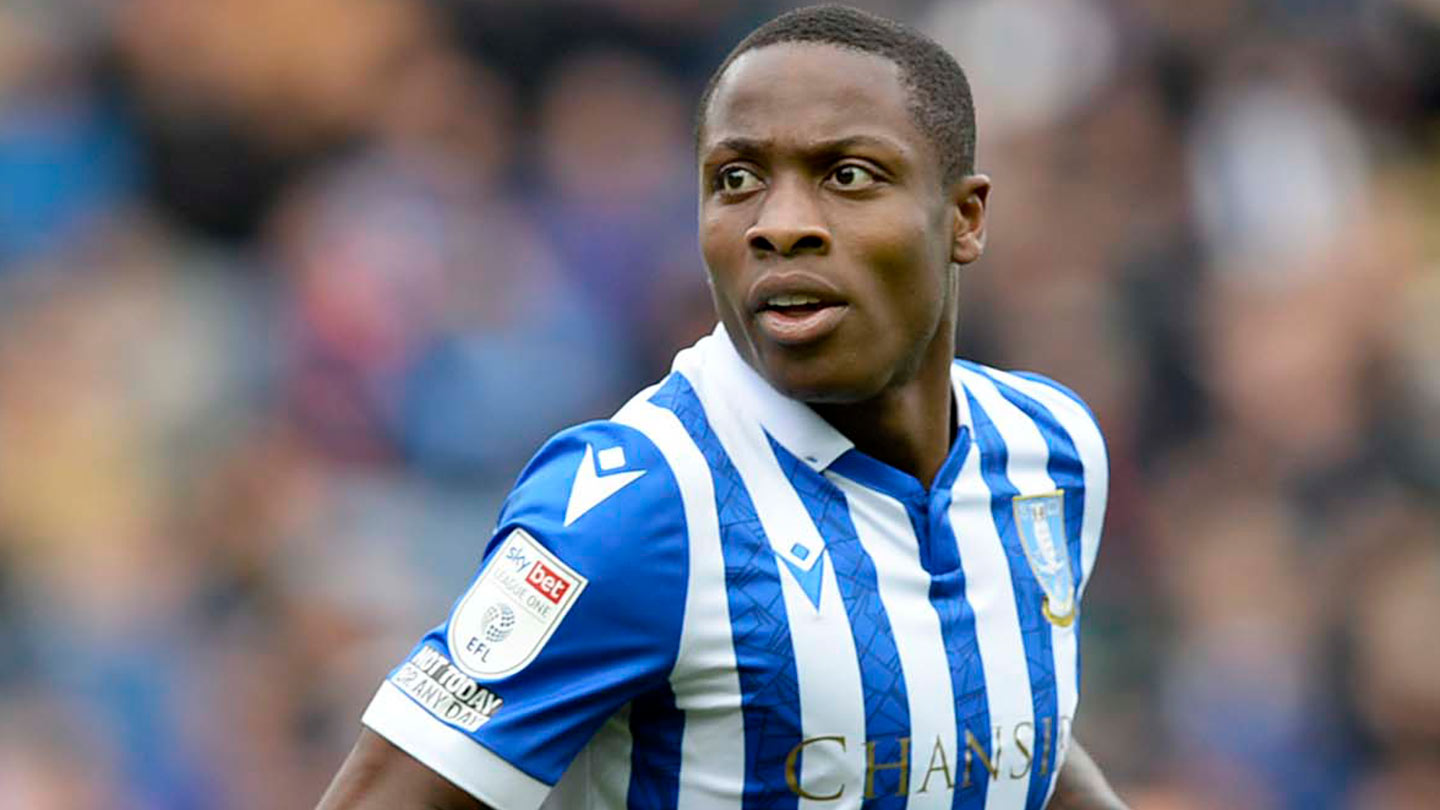 Dominic Iorfa continues to make good progress with the medical staff, though the gaffer has confirmed he remains weeks away from resuming full training.

Likewise Chey Dunkley, our December Player of the Month is working his way back to full fitness.

Saturday’s goalscorer Marvin Johnson was substituted in the 84th minute after picking up a knock against Ipswich and will also be monitored.

Morecambe: The Shrimps added to their squad on deadline day with the signing of winger Dylan Connolly from Northampton on an 18-month contract.

Defender Liam Gibson is a doubt and was withdrawn midway through the first half on Saturday after picking up an injury in Morecambe’s 2-2 draw with Accrington.

Pick up a copy of ‘Wednesday’ on Tuesday night, priced £3 and available in and around the stadium. 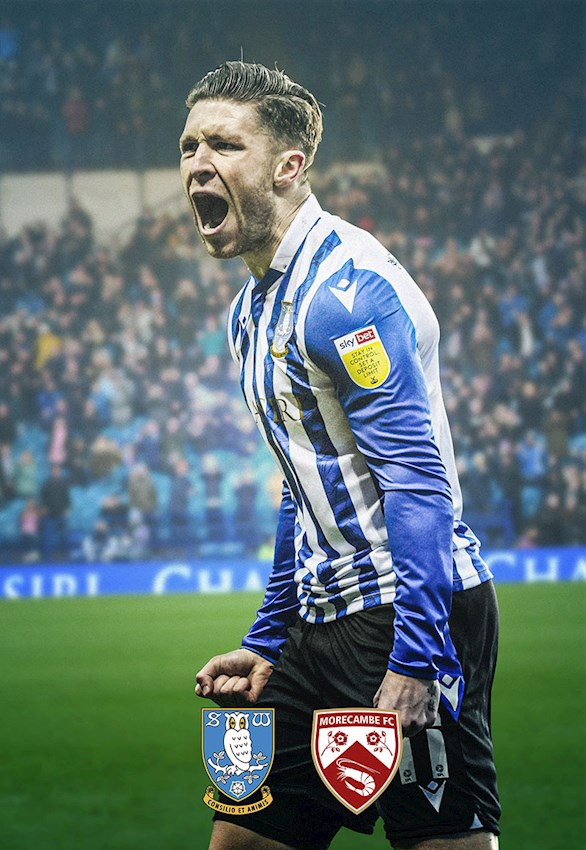 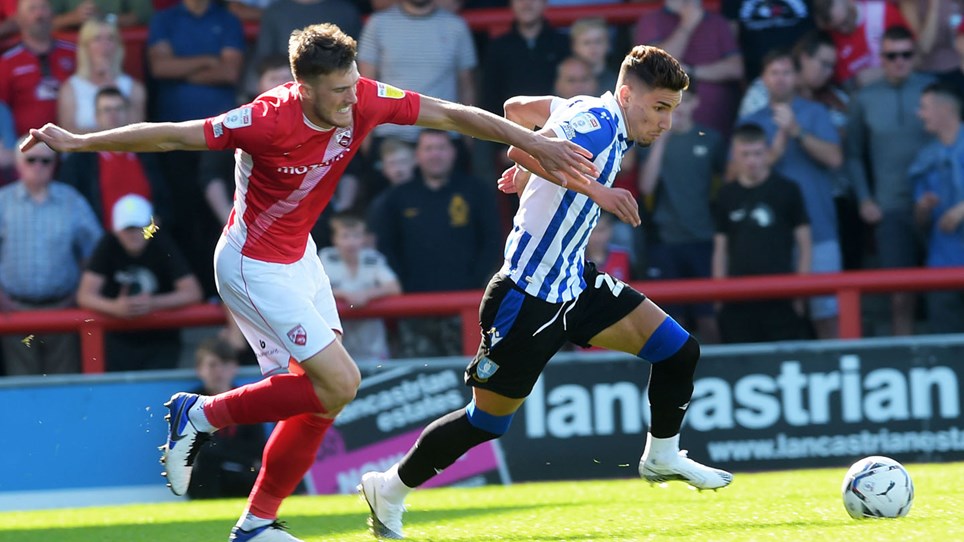 It was third time lucky for the Owls and one better for George Byers, whose second half wondergoal laid foundation for victory over Morecambe at Hillsborough.

Twice Wednesday had strikes disallowed before Byers intervened with a quite sublime hit from distance.

Byers saw an identical effort crash against the bar in the corresponding fixture at the Mazuna Stadium but this time the Kop net rippled. 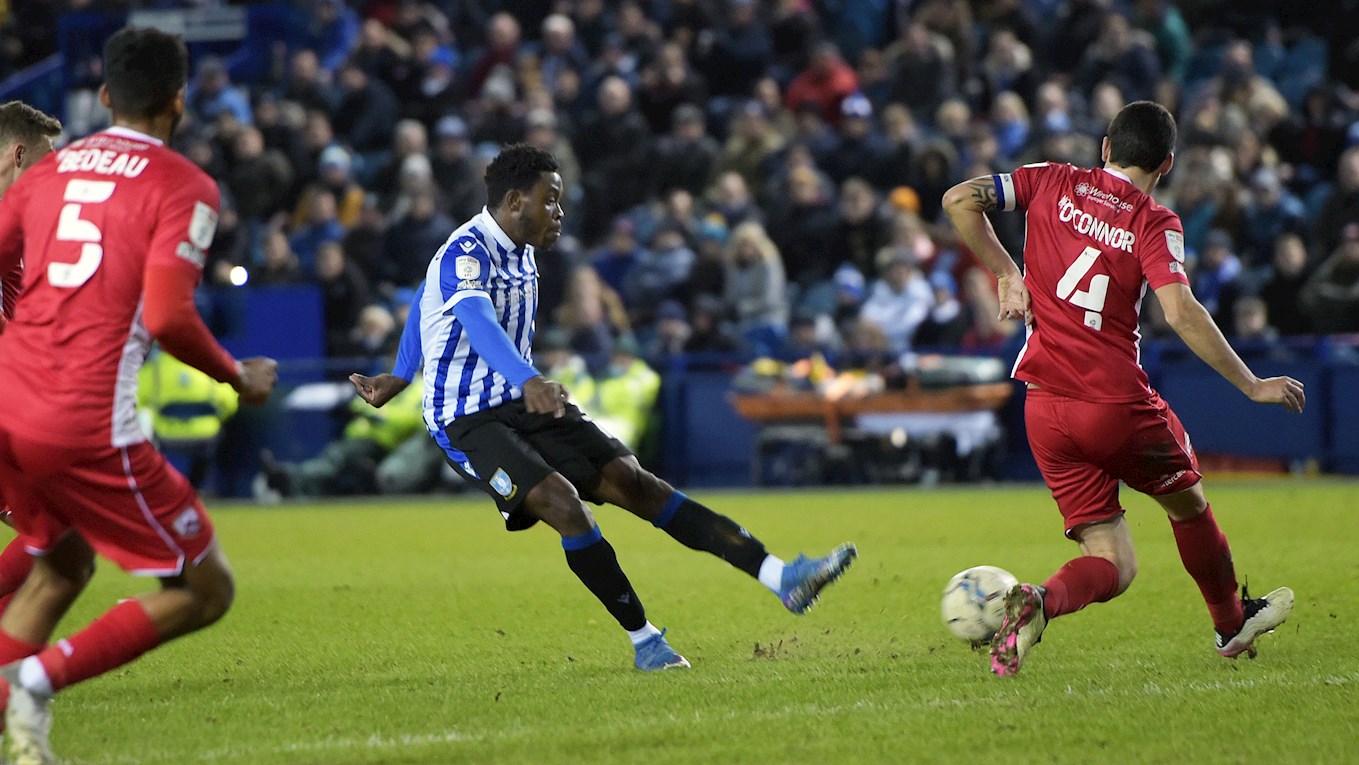 Nathaniel Mendez-Laing doubled the lead in stoppage time to seal the win the Owls deserved as they dominated from the start and ended the night having made ground on the top six.

Wednesday had to overcome an early hurdle when Harlee Dean’s evening was cut short just seven minutes in.

The new recruit pulled up and succumbed to injury, leading to a rejig that saw Sam Hutchinson move to the middle of the back three with Liam Palmer coming on from the bench. 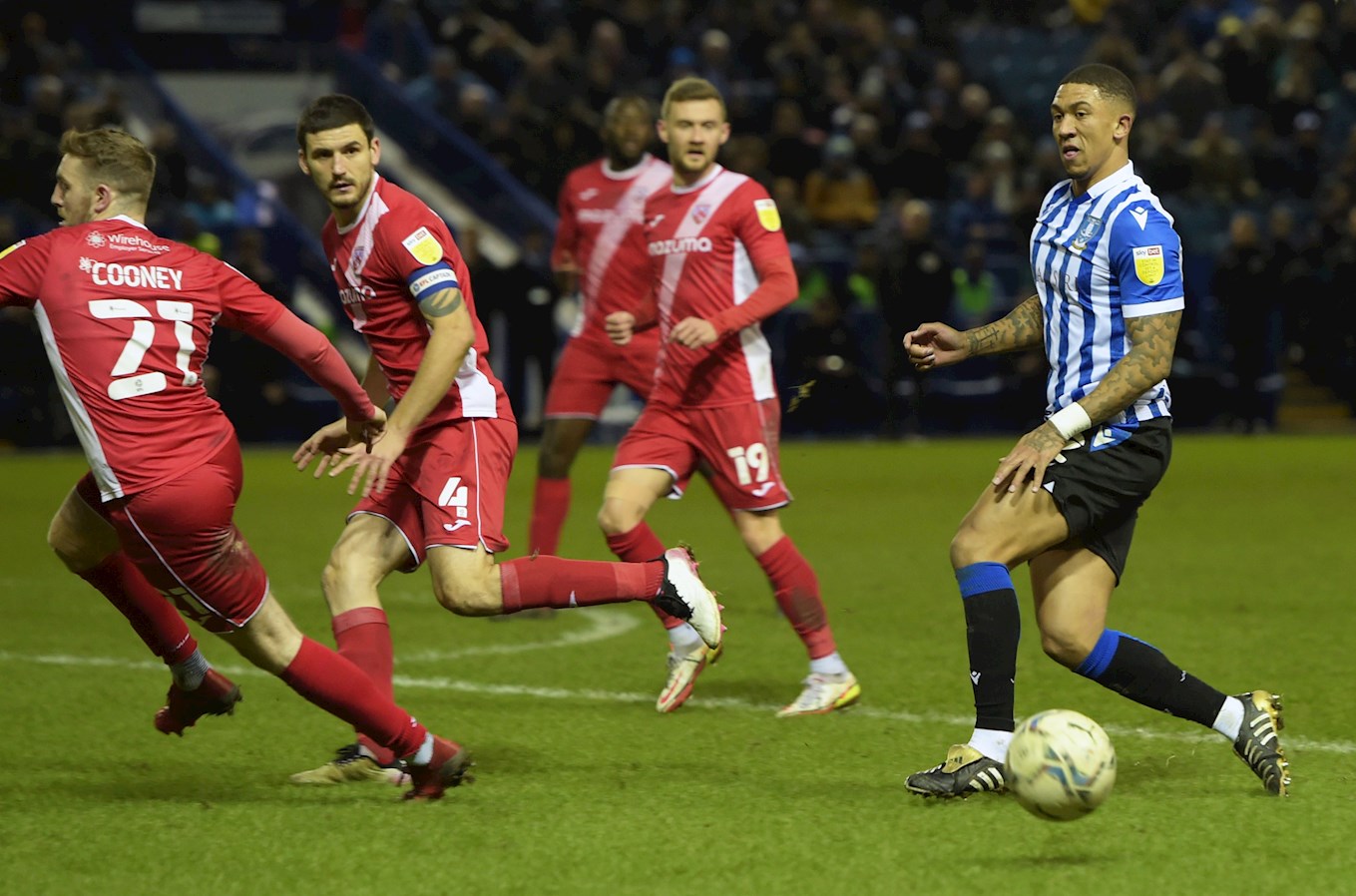 The Owls were undaunted, though, and applied consistent pressure as the first half developed.

Josh Windass’ ferocious near post volley drew a fabulous save from Trevor Carson, who paid a price as the impact ultimately forced the keeper out of the action

But the traffic wasn’t all one-way and Bailey Peacock-Farrell darted off his line to thwart Arthur Gnahoua. 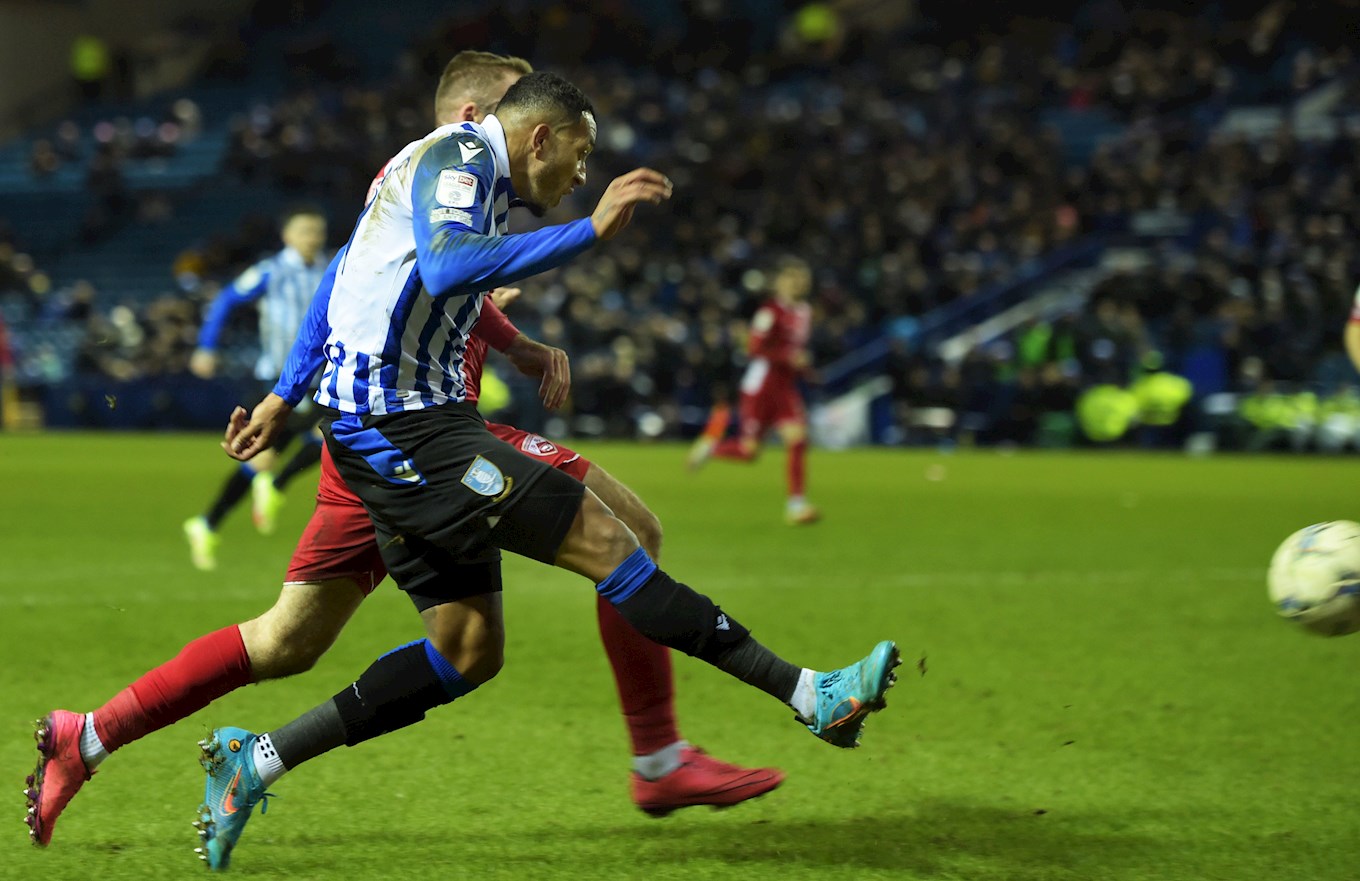 But Wednesday soon regained control and only a perfectly-timed block from Ryan Cooney prevented a certain goal after Mandez-Laing took aim from six yards.

Marvin Johnson, on target last weekend, had the ball in the net again just before the break but a raised flag kept the contest goalless.

Fisayo Dele-Bashiru became the second Owls casualty and was replaced by Callum Paterson but it was Florian Kamberi higher up the pitch who almost made the breakthrough. 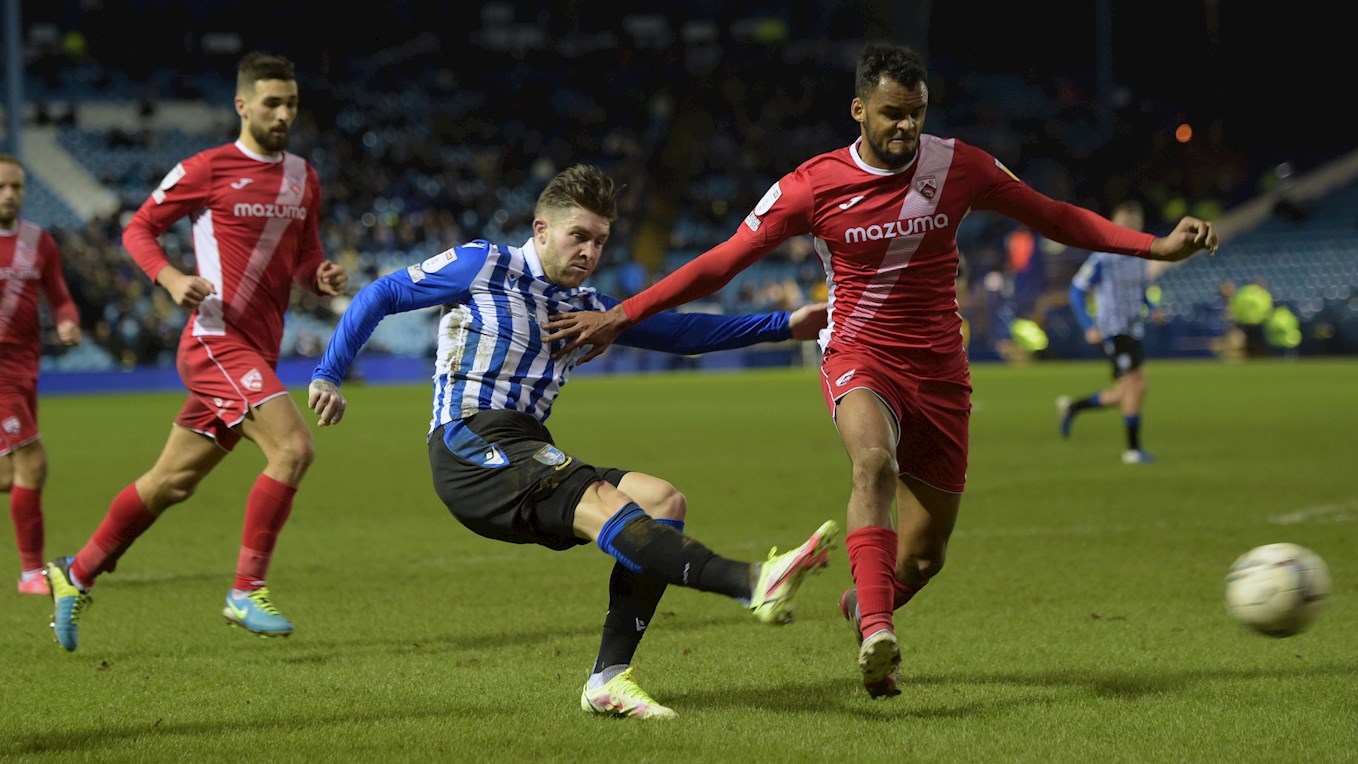 The Albanian striker twisted to head home a Byers cross but the flag was up for a second time to the hosts’ frustration.

Substitute keeper Kyle Letheren went down low to keep out Johnson before the deadlock was finally broken on 55 minutes.

Byers took possession 25 yards out and unleashed a vicious, swerving drive into the top corner that gave the despairing Letheren no chance. 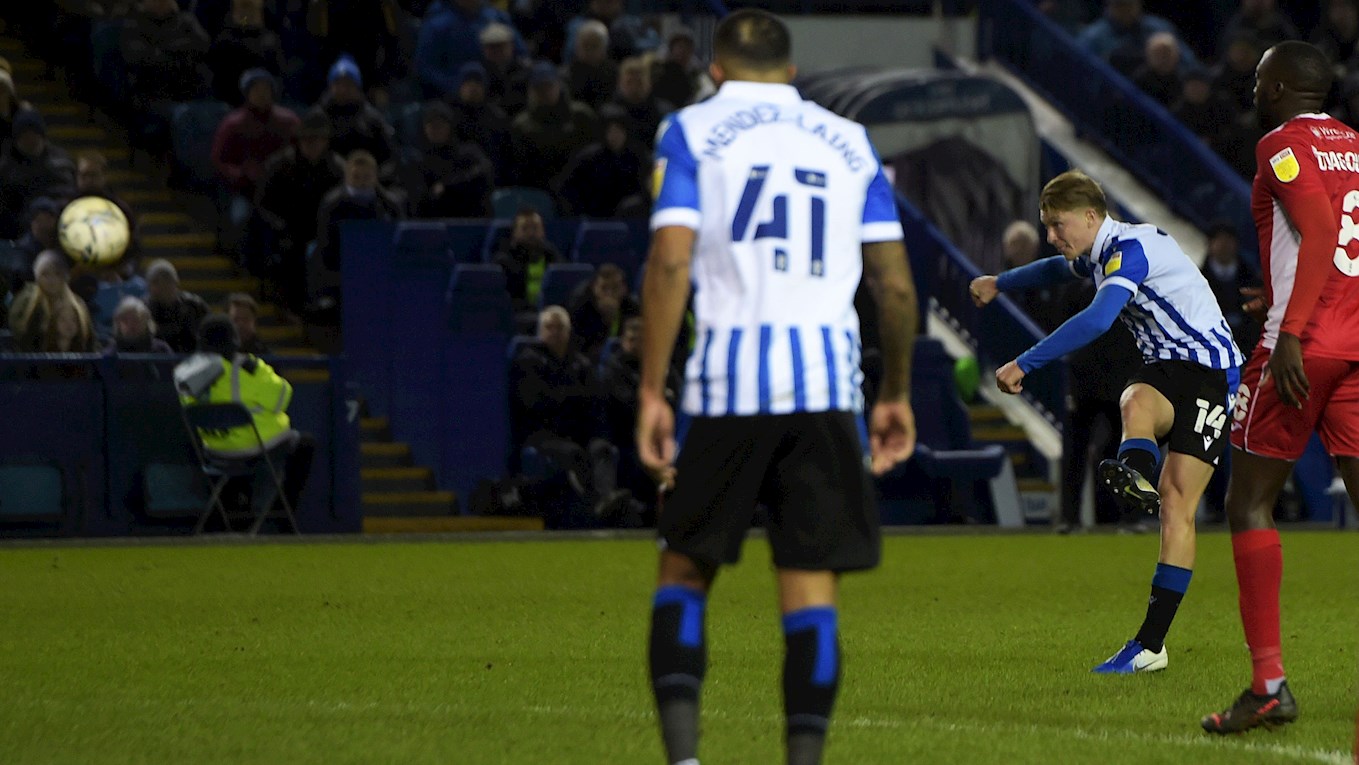 From that juncture the Owls stayed in command but the absence of that elusive second goal almost allowed Morecambe a fortunate leveller in the closing stages.

The Owls had Hutchinson to thank as the defender twice cleared off the line during the same incredible passage of play, first from Cole Stockton and then Jonathan Obika.

And that paved the way for the final blow as Mendez-Laing burst into the box on the angle and found the far corner with the aid of a deflection to put the points to bed. 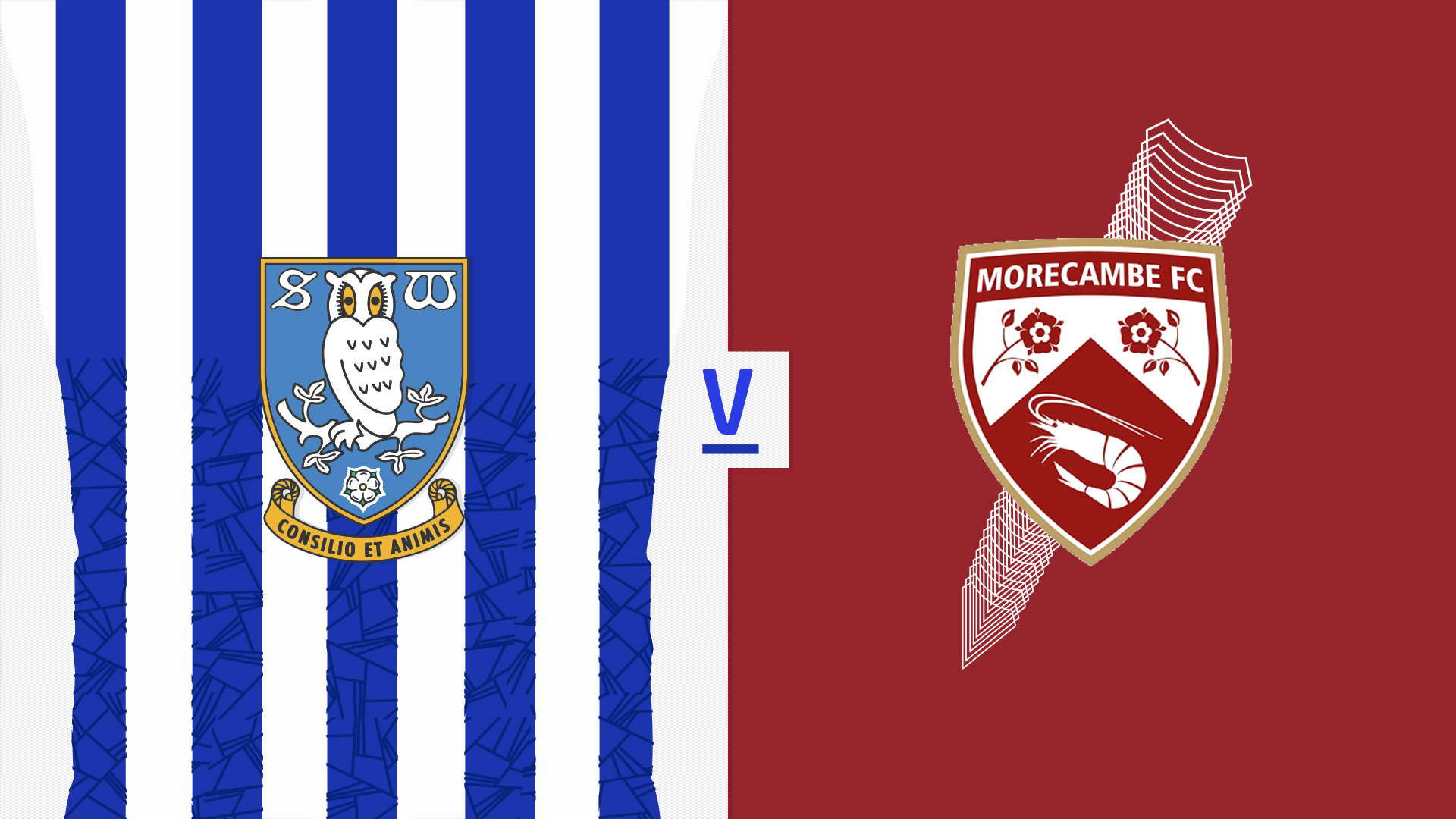 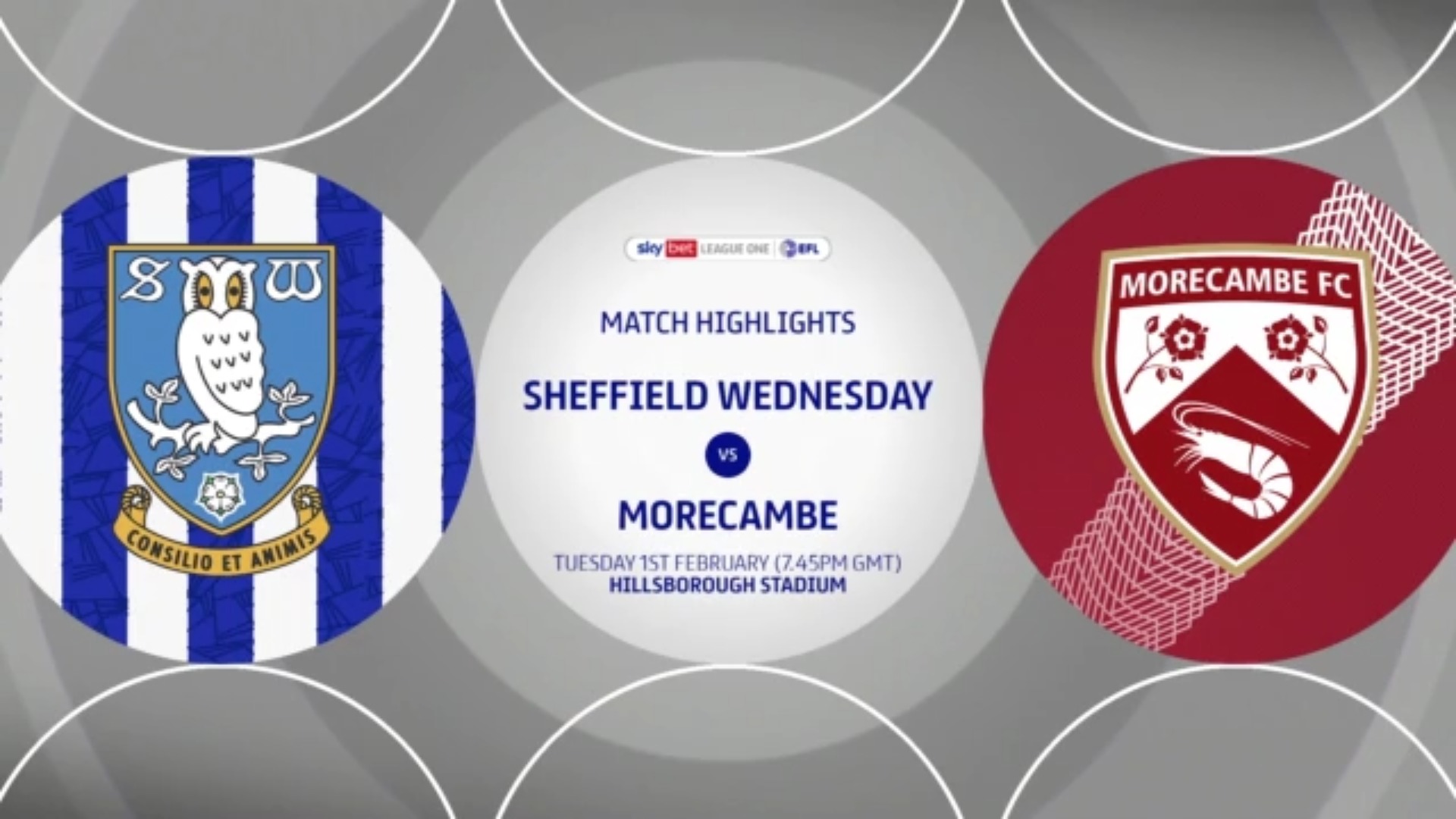 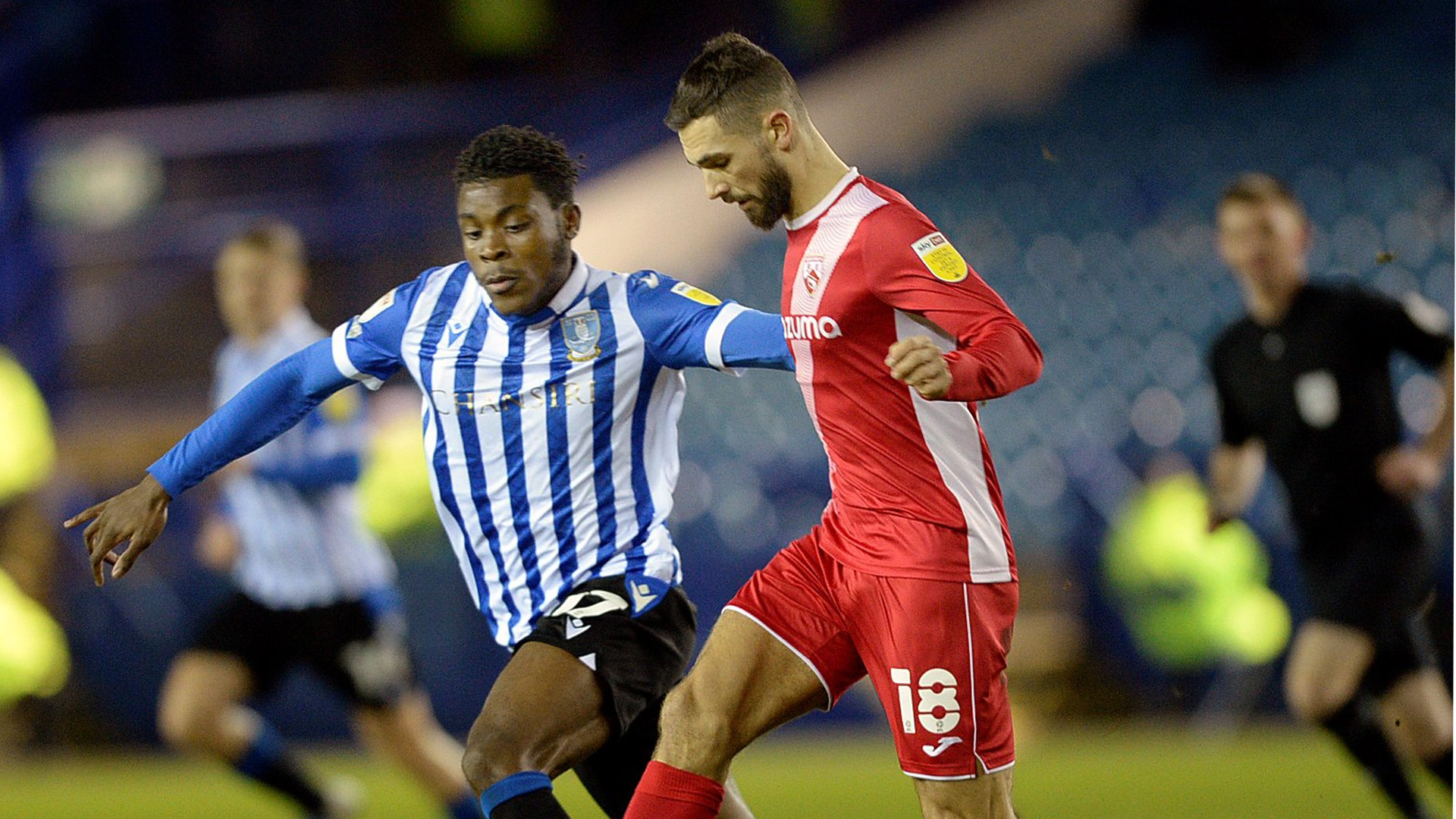