A sizzling attacking display from Fulham kept alive their slim chance of automatic promotion at the expense of Wednesday, who were beaten 5-3 in a capital goal glut at Craven Cottage.

Atdhe Nuhiu climbed off the bench with immediate effect for the second period but Kebano restored the three-goal cushion.

Fellow Owls substitute Jacob Murphy set up a nervier end than the Londoners may have welcomed and Nuhiu netted his second in the closing stages.

But Bobby Decordova-Reid had the final say and Fulham go into the final round of fixtures with an outside chance of a top-two finish.

An even start gave way to the opener 10 minutes in that set the tone for a one-sided first half. Anthony Knockaert drove a sweeping crossfield ball to Kebano which the wideman skilfully took from the sky before unleashing a low shot that fizzed past Joe Wildsmith.

The hosts had their tails up and promptly almost doubled their lead. Ex-Owls loanee Michael Hector picked out Cyrus Christie with a scything pass and the former Derby man cut inside to hit the target but Wildsmith was down swiftly to parry wide. 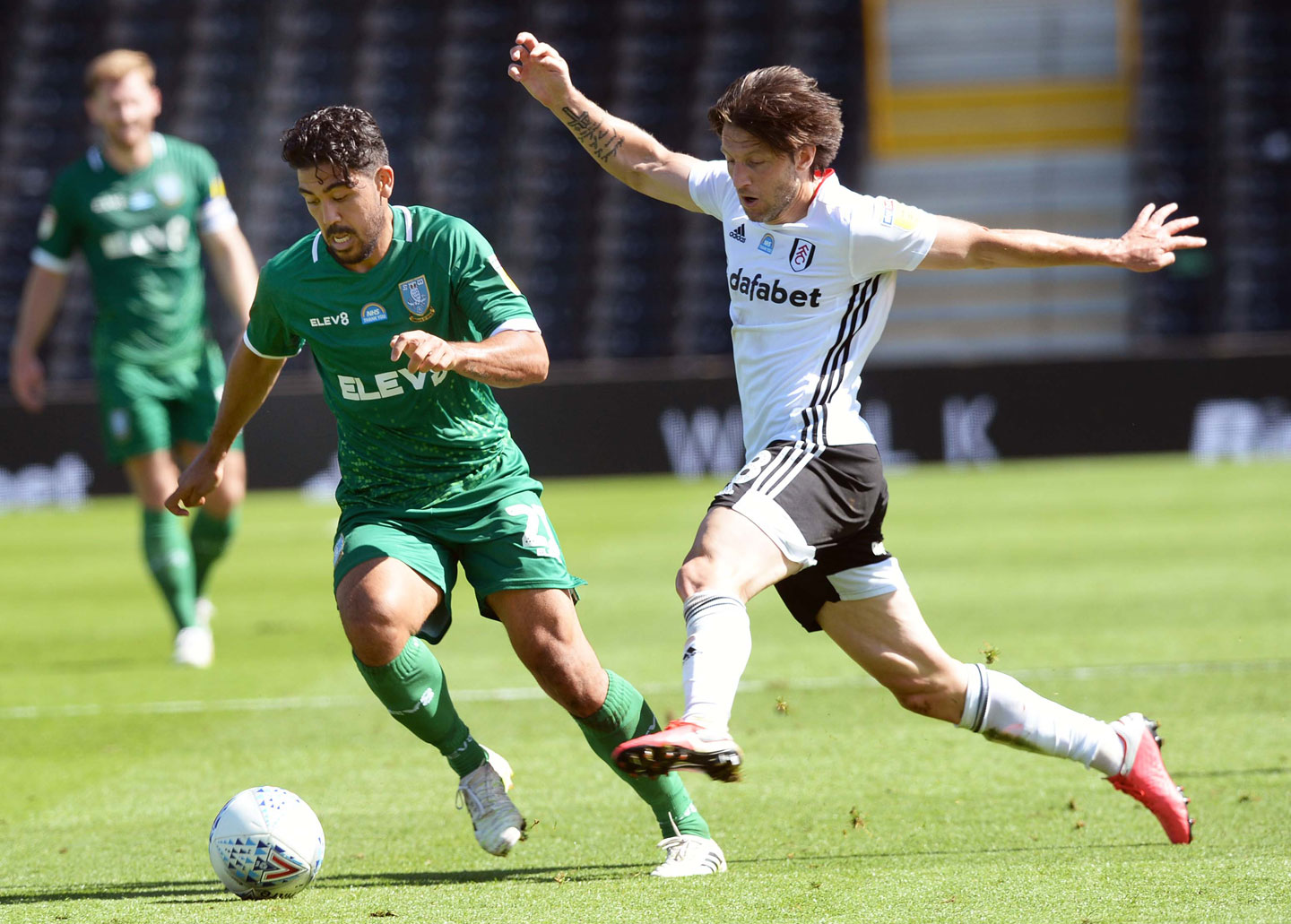 Wednesday had to wait until the 20-minute mark to make an impression as Kadeem Harris burst inside the box on the angle but his driven effort was comfortably saved by Marek Rodak.

On 27 minutes, though, Fulham’s firepower proved too much and this time they did make it 2-0. Again it was a former Wednesday loanee at the heart as Josh Onomah sent Mitrovic racing in on goal and the Serb’s finish was emphatic into the bottom corner.

Onomah tried his luck with a fierce half volley moments after the restart and only an athletic diving save from Wildsmith prevented a third.

But the Owls keeper was beaten for a third time four minutes before half time as the Cottagers made the second half all but academic.

Dominic Iorfa tripped Kabano in the area and the referee had no hesitation in pointing to the spot. Mitrovic stepped up and sent Wildsmith the wrong way to send his side into the break in complete command.

Garry Monk made three changes at half time, with Murphy, Nuhiu and Connor Wickham all sent into the fray.

And two of those substitutes were straight into the thick of things as the Owls reduced the deficit just four minutes in. Murphy picked the pocket of Maxime Le Marchand and advanced in on goal, only to be brought down by Rodak. The referee awarded his second penalty of the contest and Nuhiu did the necessaries from 12 yards.

Wednesday enjoyed periods of possession as they sought a second but their uphill task was only increased on 73 minutes.

Kebano lined up a free kick just outside the area and his daisycutter found a way beneath the wall and into the net.

But still there was life in the Owls and Murphy pulled another back on 77 minutes. Barry Bannan’s corner was flicked on by Nuhiu and the ball was cleared only as far as Murphy, who drilled his eighth goal of the season from 15 yards.

Then, with a minute to go, the substitutes again combined to make the deficit only a single goal. Murphy delivered a delicious feed from the right and Nuhiu climbed high to dispatch past Rodak.

But just as it seemed Wednesday might have snatched an unlikely point, Fulham put the points beyond doubt in an instant as Decordova-Reid slammed hard and low from distance to make it 5-3 and game over.

Whites midfielder Harrison Reed was shown a second yellow card in the dying seconds, but there wasn't enough time left in the action-packed clash for Wednesday to capitalise.