Speaking to the Owls' matchday programme last season, popular winger Jon-Paul McGovern talks through his first season with Wednesday which culminated in one of the club's most memorable days in our recent history, the 4-2 play-off final win in Cardiff!

Playing at Hillsborough was the best time of my career, you don’t know how big it is until you’ve been here. It’s a very unique bond with the fans. I always talked to fans and met the kids, it’s a massive part of the game and I loved it.

Sheffield is very much like Glasgow, the people are working class, they save up to watch the games and they want to see the players working hard, so I always tried to do that.

I was at Livingston, but it looked like I wouldn’t be staying, so my agent at the time got in contact with a few clubs, Wednesday invited me down to do some training.

It was a hard dressing room to come in to, the club was getting rid of the big earners. None of the boys were really talking to me at the time, I was basically coming in to do their job. 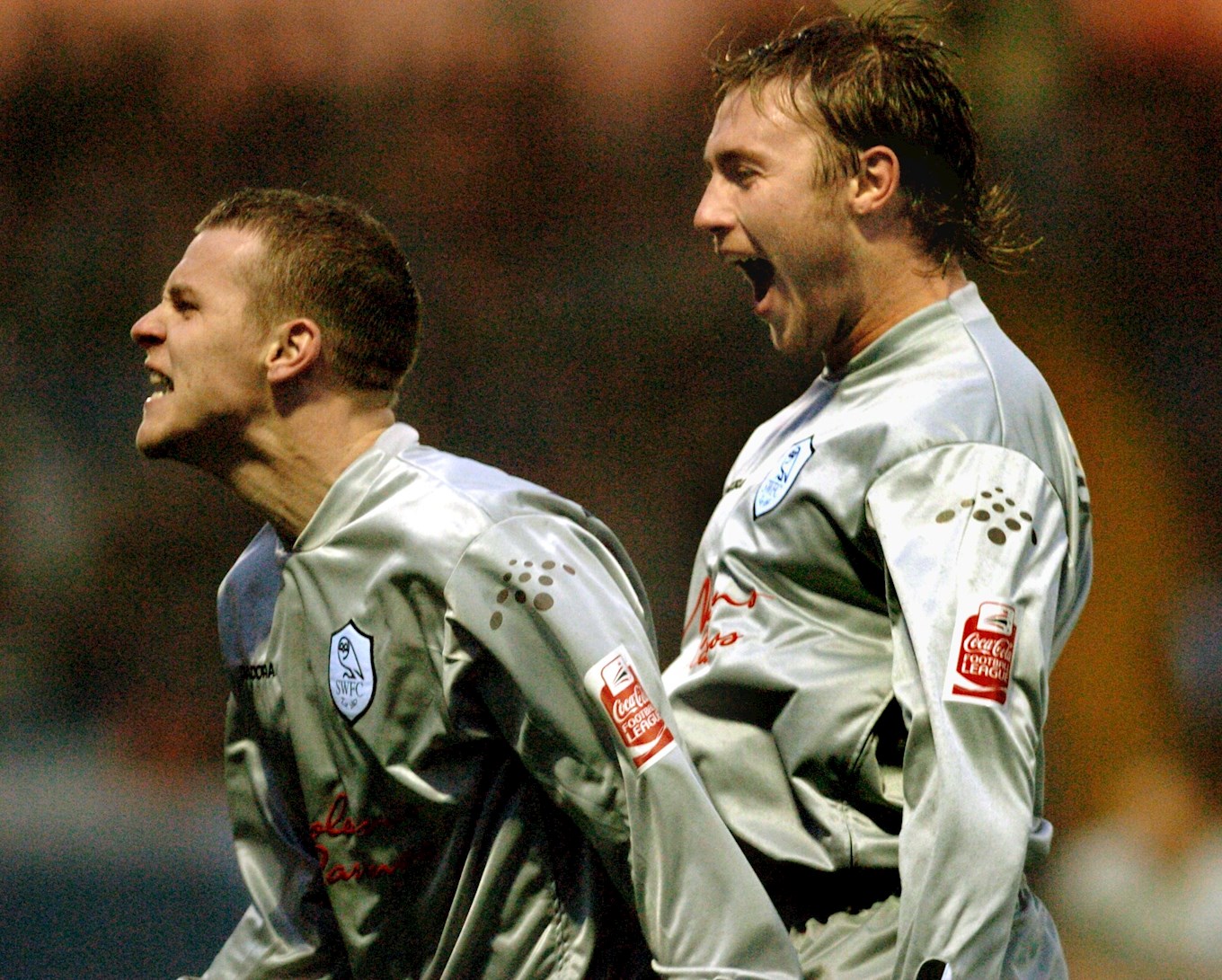 I asked Livingston if I could leave for free, they said they wanted me to stay but I was saying ‘no, I want to play for Sheffield Wednesday’.

About 13 players came in that summer. We were all in the same boat and had a point to prove, we were all young and hungry. We weren’t coming from big clubs, we didn’t have big egos, we just wanted to get better. We all buzzed off playing in front of 25,000 people at Hillsborough.

Me, Glenn Whelan, David Lucas and Lee Bullen shared an apartment, that really helped us bond and get to know each other more.

Pre-season that summer was unique! Looking back on it, it was pretty mad. We took a group of young players to Ibiza, where the facilities weren’t fantastic. But it created a real togetherness and it worked, it was a masterstroke. 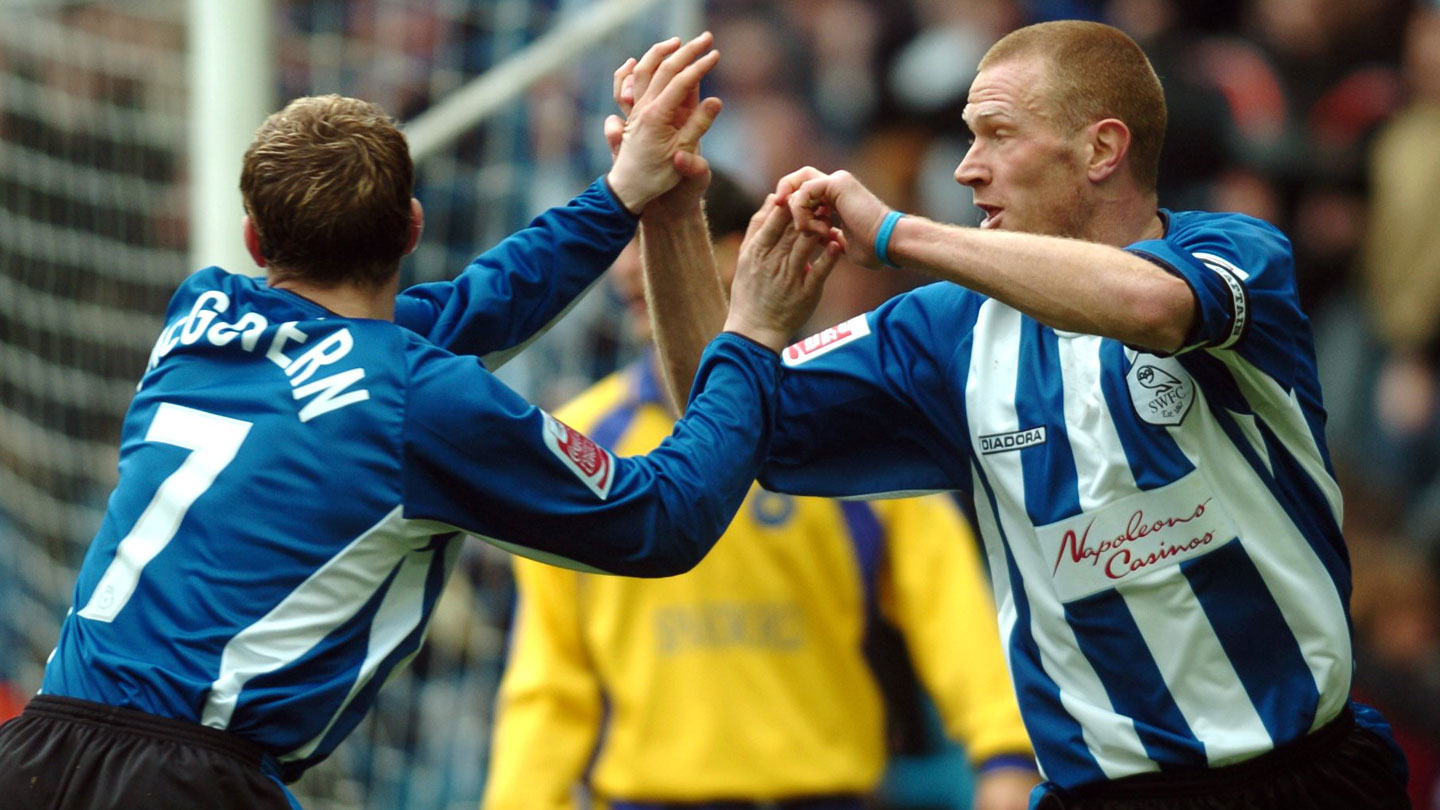 Guy Branston was going about doing practical jokes, opening doors and throwing powder, there was all sorts happening. We ended up going on a team night out which everyone still talks about. In terms of a pre-season, it was special.

I remember looking around at the players and thinking, we are absolutely glued together. I never thought ‘we are going to get promotion’, it was just a case of let’s go and see what we can do.

We started off a bit rocky, the first game was a disaster, losing 3-0 to Colchester, and I think Chris Turner getting sacked early on was harsh. Paul Sturrock came in all guns blazing and that was a wake-up call!

He got us together and Lee Peacock came in with white timberland boots and a pink t-shirt on, and I remember thinking, ‘I don’t think that’s the sort of thing the manager is looking for!’ 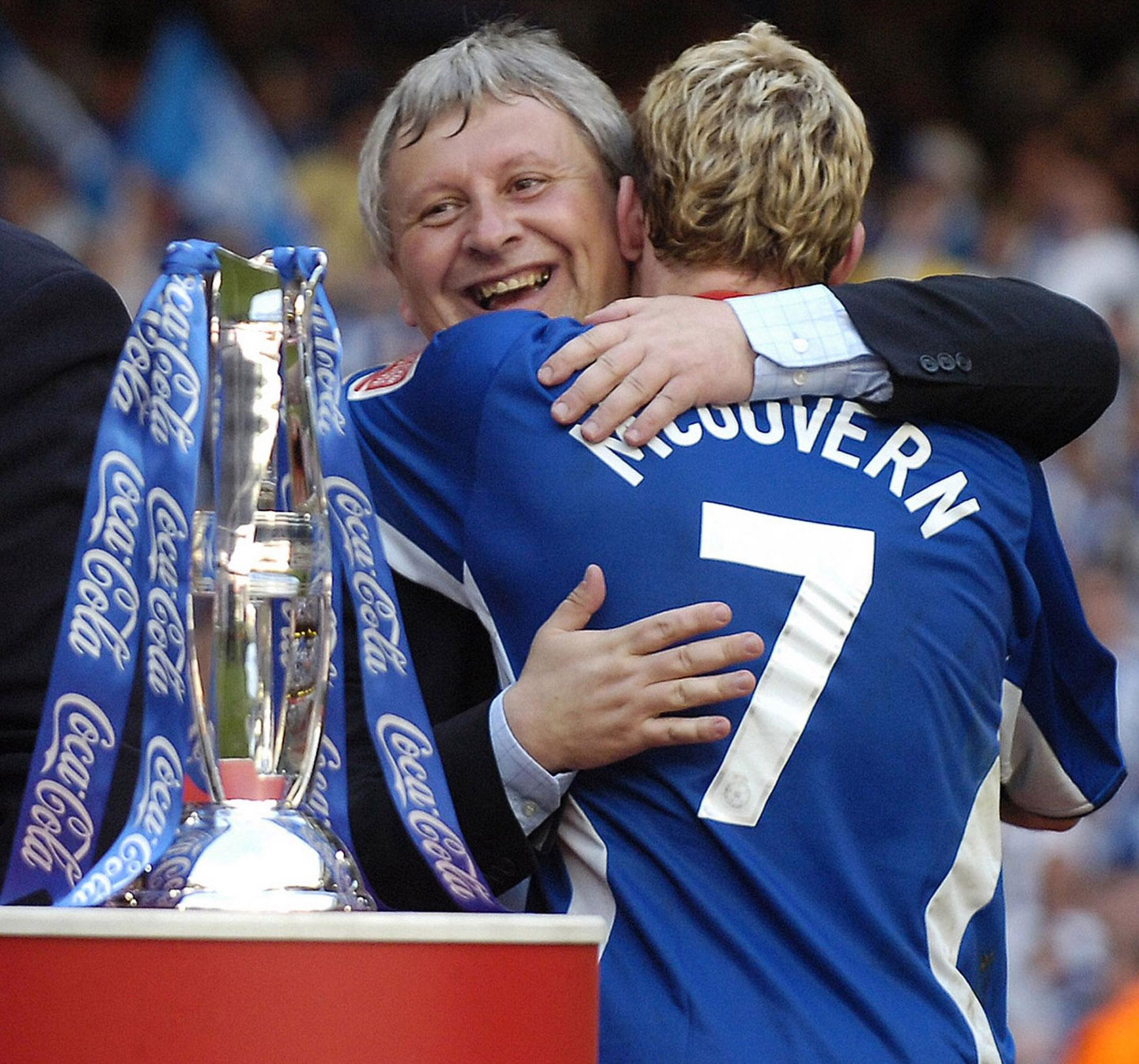 The manager took me in his office with Chris Brunt and said: “I’ve heard you two are the wide players.

“I want you to go home, have a nap and grow another lung. Because you two are going to be running up and down, up and down.”

I was thinking, ‘I didn’t come here to run up and down, I wanted to play nice football!’

My first goal was against MK Dons in October, I remember because my dad had me on his bet for first goalscorer, it was my birthday weekend! 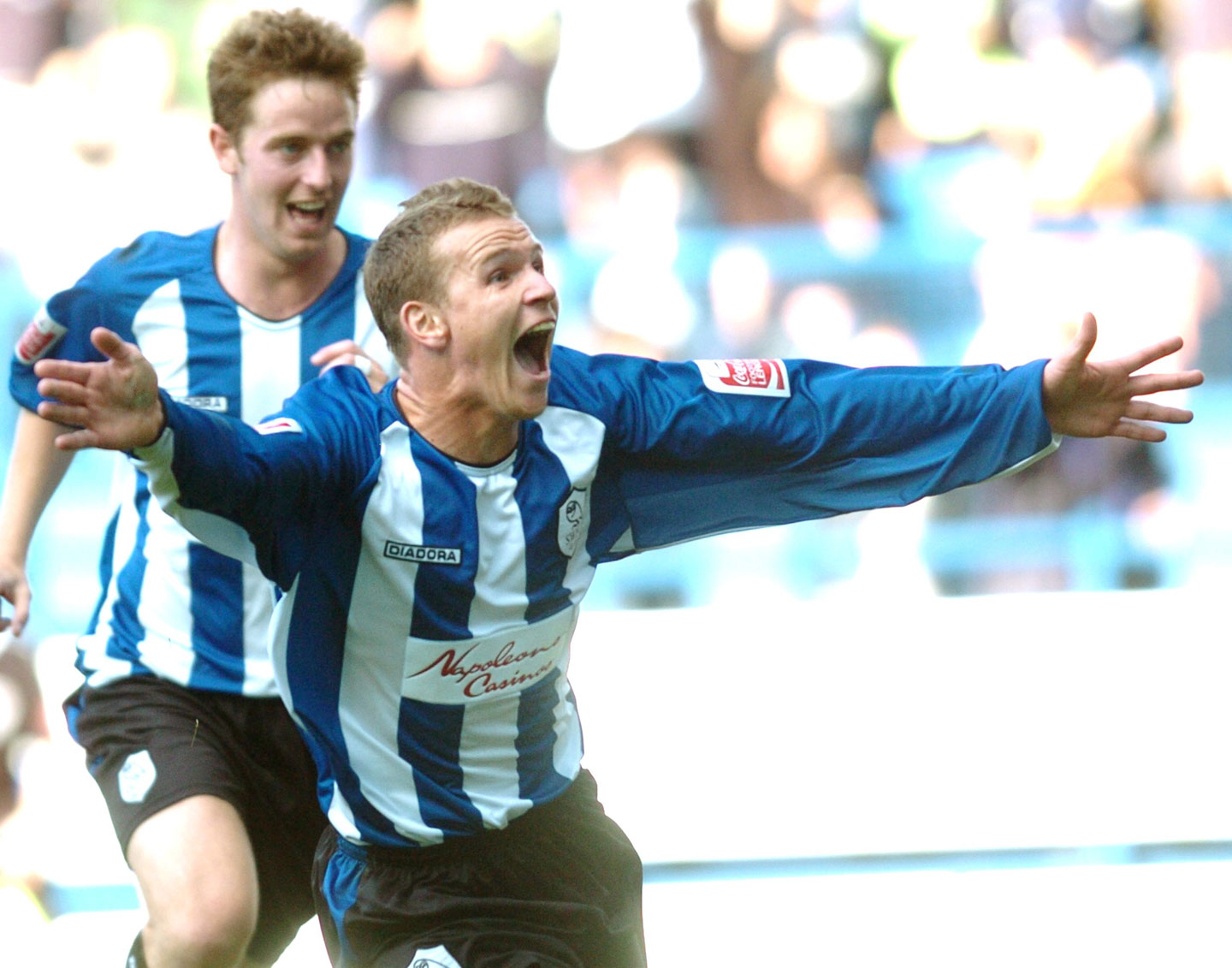 I was never too fussed about scoring, I just wanted to help the team, I definitely looked at trying to make goals rather than score. Peter Eustace helped me a lot with my crossing and gave me a lot of advice, he took time out of his day and I have to thank him a lot for that.

Paul Sturrock brought in some good loan players that season. You don’t realise how hard that is, to pick up good players who can come in and buy into everything. Kenwyne Jones came in and scored seven in seven, Craig Rocastle was a big addition as was James Quinn and Alex Bruce.

We always thought we would make the play offs, I still get goosebumps now when I see my goal against Brentford in the semis. 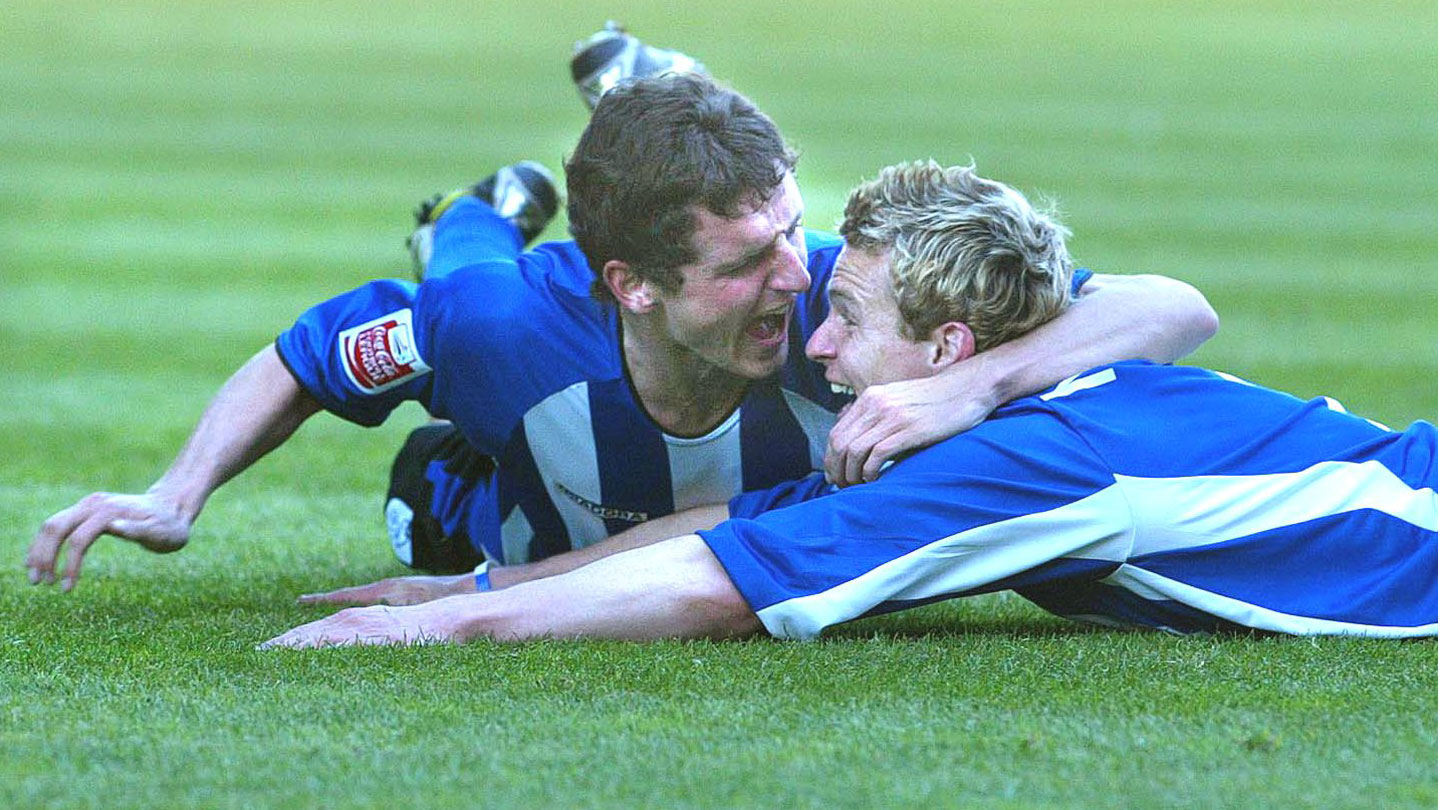 My mates were at the game and they phoned me to say ‘there’s loads of people with McGovern shirts on, what’s all that about, have you been giving them out?!’

There were crowds of people following the bus, it was a sea of blue and white, we were all having a laugh and thinking it was unbelievable.

I scored the first goal in the final and I went mental with Glenn Whelan. The celebration was because we watched ‘Any Given Sunday’ the night before. One of the guys does a celebration in the film and we said we’d do it. Looking back now I’m thinking ‘what are we doing there!’ 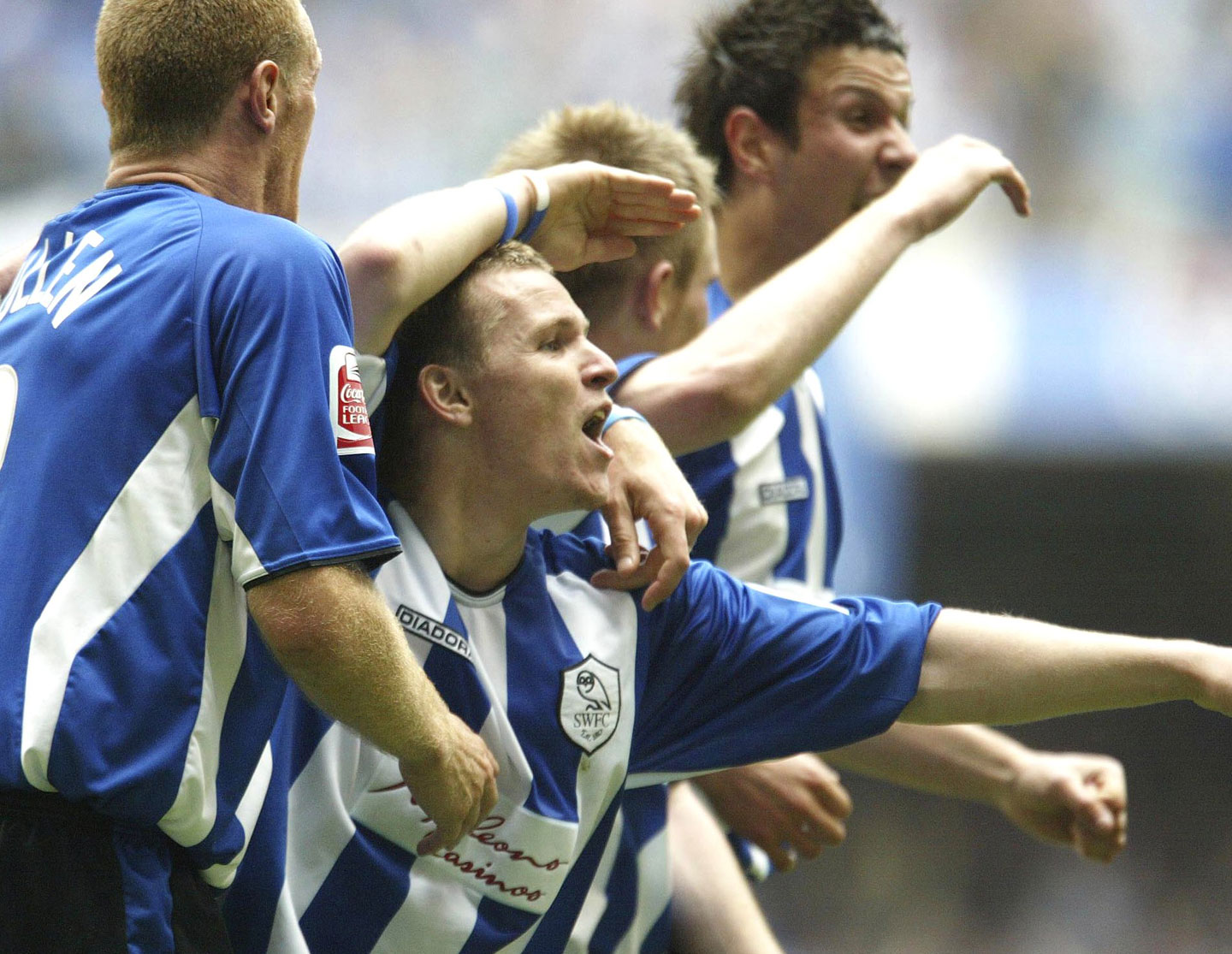 We went 2-1 down, and even then I’m thinking, we are still going to win, we will score in a minute, I’m not a cocky person, but I just thought we’d be fine.

Steve MacLean comes on, he was on a goal bonus if he got 20 goals and was one away. Afterwards people were saying he was brave to take the penalty, but I was thinking ‘he was never going to let anyone else take that!’

Glenn Whelan’s goal was unbelievable. Obviously he’s gone on to have a brilliant career, for me he’s got more in his locker than people think.

Then, Drew Talbot scores, and I remember the lads jumping on top of each other, we’d done it! 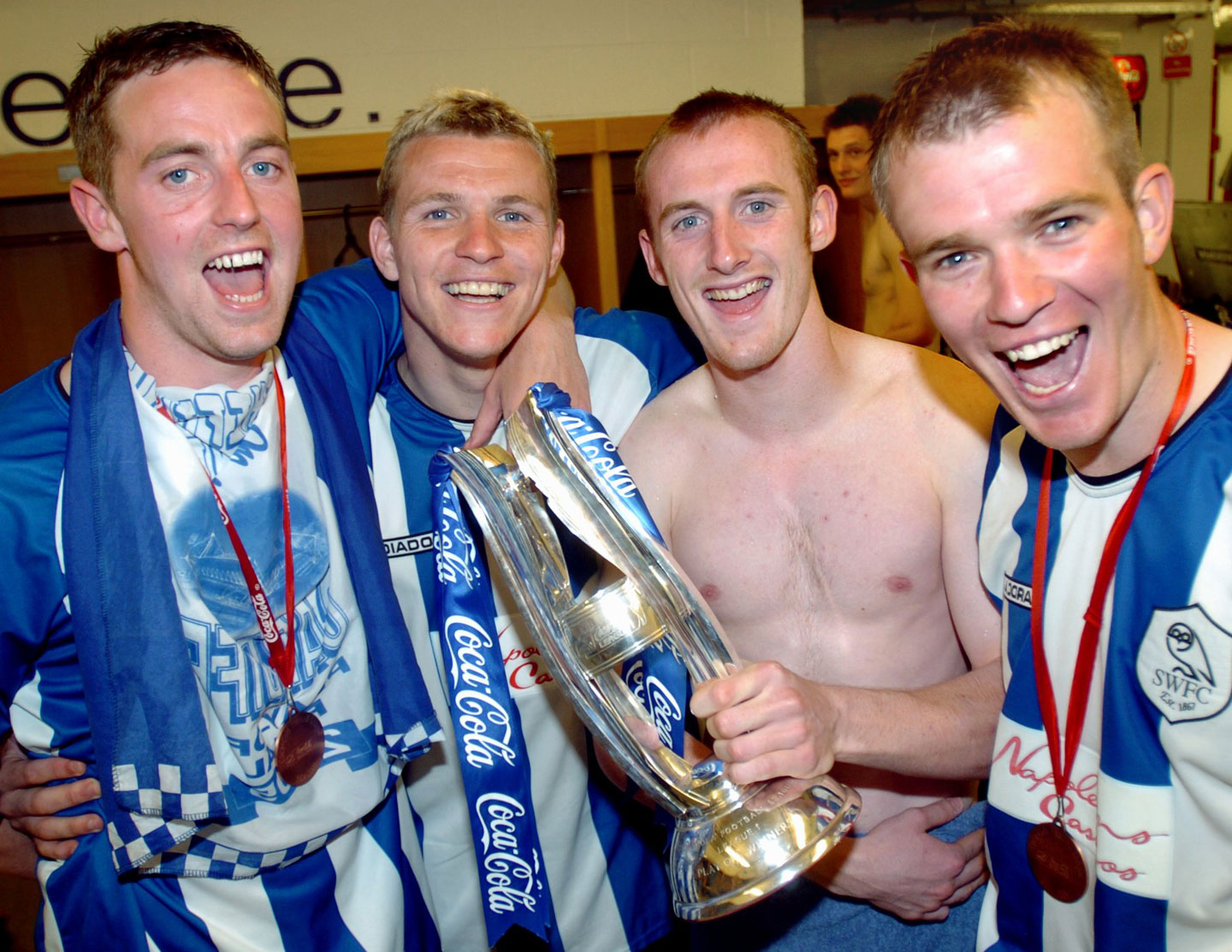 I played every game that season, 53 consecutive matches, which was a bit of a ‘Roy of the Rovers’ moment for me. I like to think I gave my all.

My time at Wednesday was definitely the highlight of my career.