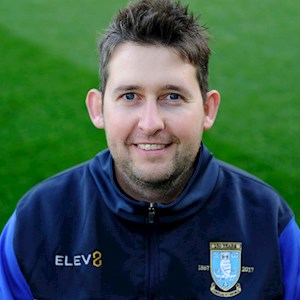 Liam joined SWFC as senior first team physiotherapist in the summer of 2017 with a wealth of experience of over 14 years working in professional football.

He completed his first undergraduate degree in 2003 at the University of Salford and immediately began his career at Hull City as academy physiotherapist.

During his eight years in East Yorkshire, he made his way up the ranks and was appointed Head of Physiotherapy in 2010.

During that time Liam completed his second undergraduate degree at the University of Salford.

In 2012 joined Blackburn Rovers as senior first team physiotherapist.
In order to keep up to date with the latest evidence in sports medicine, Liam competed his postgraduate degree in Sports Physiotherapy at the University of Bath.

Liam’s current role is to develop and implement service changes and provide clinical care in the field of sports medicine; encompassing physiotherapy assessment, treatment and sports medicine management of the Owls’ first team.