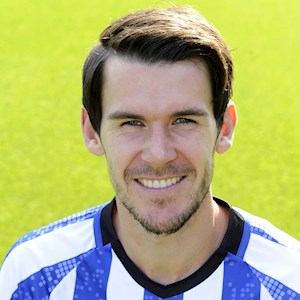 Kieran Lee extended his contract with Sheffield Wednesday in July 2016, signing a new three-year deal that runs until summer 2019.

The midfielder joined Wednesday in May 2012 after falling out of contract with Oldham.

From then, the midfield ace has gone from strength to strength during his spell at Hillsborough.

It wasn’t until the final game in his second campaign that Lee notched his first goal for the club away at Ipswich.

But since then, scoring goals has become a big part of the midfielder’s game, underlined by his haul of seven in 2015/16 – the highest tally of his career.

Lee hit a number of crucial goals throughout that campaign, most notably a key strike in the play-off semi final victory over Brighton.

In 2016/17 the tireless midfielder scored five goals, including dramatic late winners at Hillsborough against Bristol City and Nottingham Forest.

He made 28 appearances for Wednesday in 2016/17, helping the Owls to the Championship play-offs for the second successive season, unquestionably a key performer in the Owls’ engine room.

Lee's appearances were limited to 15 in 2017/18 with the midfielder frustrated through injuries.