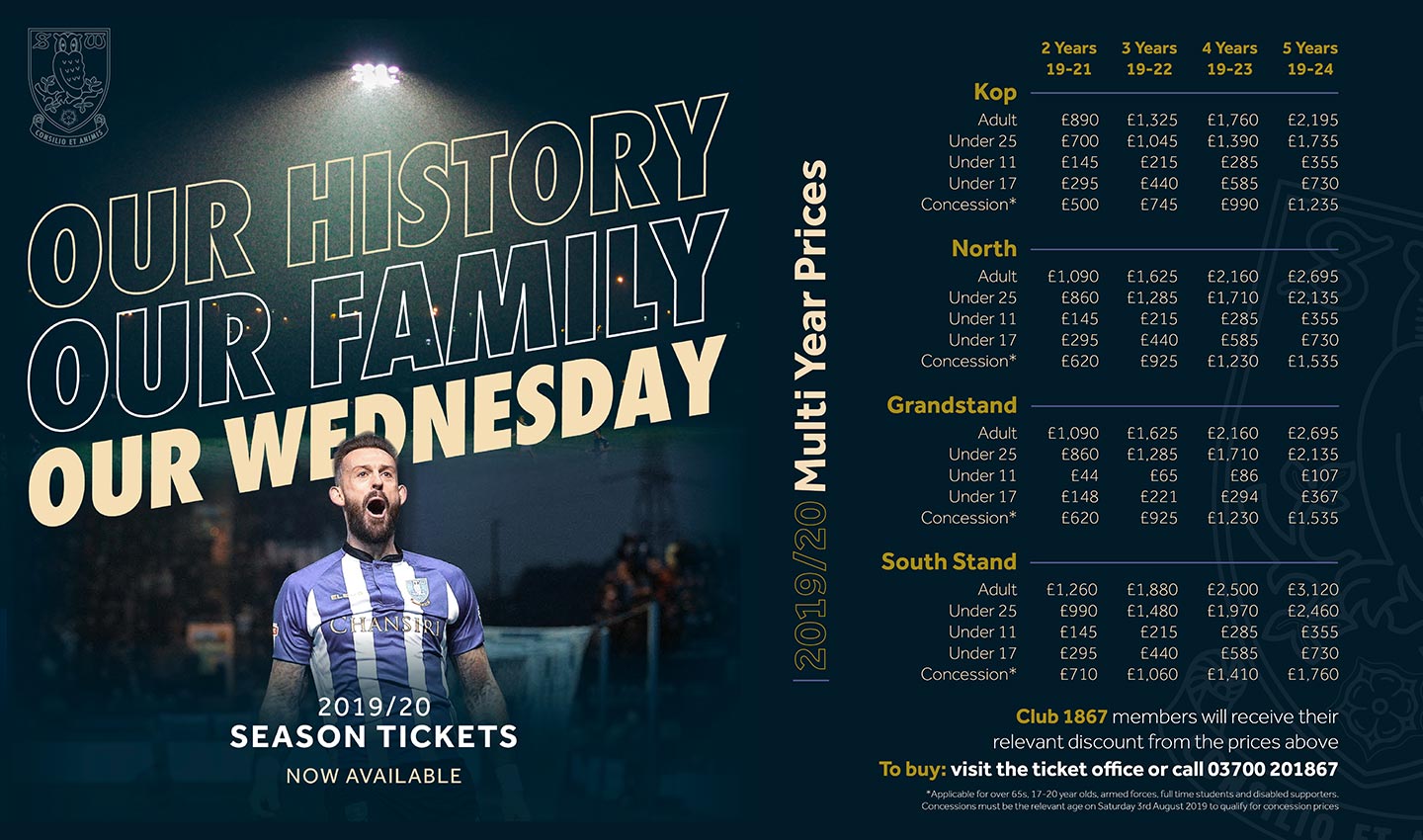 Following the success of our innovative and cost-saving Multi-Year Season Ticket originally launched three years ago, the Owls are pleased to present this extremely popular product ahead of the 2019/20 campaign.

This offer enables all original three-year Season Ticket holders with their deals coming to an end the opportunity to extend for a further five years and is also open to all supporters not already committed long term from 2019/20.

The Multi-Year Season Ticket was introduced prior to 2015/16, initially as a one-off gesture to our loyal supporters. Such was its popularity, we have now re-introduced the initiative, which will be reviewed on an ongoing basis and measured against its success.

The concept is simple - guarantee your seat at Hillsborough for up to five seasons and watch the price come down for every year you commit.

Potential savings are vast across all age groups and sets your Season Ticket price – irrespective of the division in which Wednesday are playing.

So, from next term, in addition to the usual Early Bird options, supporters will have the opportunity to purchase a one, two, three, four or five-year Season Ticket.

As an example of the super savings on offer, prices on the Kop for a five-year ticket equate to just £19.08 per game over the course of the deal.

The Multi-Year Season Ticket is on sale now until Monday 1 April.

Owls chairman Dejphon Chansiri told swfc.co.uk: “At the last few forums, fans have asked if they would have the opportunity to extend their Multi-Year Season Tickets once they expired at the end of this 2018/19 season.

“At the time we were unsure if we would offer the ticket again but following further feedback I wanted to give those fans another chance to commit and lock in their Season Ticket price for up to five years.

Due to financial regulations for Credit Card purchases against such products, unfortunately we are unable to accept Credit Card payments for Multi-Year Season Tickets.

However, supporters can spread the cost over 20 months with our finance partners V12 finance*. Purchase by this method is available in person at the Ticket Office only.

The Ticket Office will be extremely busy during the Early Bird and Multi-Year Season Ticket period, hence supporters are advised to purchase as early as possible. The nearer the deadline, the busier staff will be.

Supporters can request a call back from the Ticket Office by emailing ticketenquiries@swfc.co.uk with your client ID, purchase request and daytime contact numbers. A member of the team will call back at the earliest convenience.

* Six, 10 and 20-month options are available to spread the cost of your Multi-Year Season Ticket. Each option includes an administration fee which is taken on the first payment 30 days after signing up. Rate for six months is 6.25%, ten months is 6.5% whilst the 20-month option is 7.9%.